Commemorating the 1200th Anniversary of Saichō's Death: Buddhist Art of the Tendai School

Saichō and the Roots of Tendai Buddhism

The Nobility and Tendai Art

Tendai Buddhism During the Edo Period

The Spread of Tendai Buddhism Across Japan

Saichō and the Roots of Tendai Buddhism

Saichō subsequently founded the Enryaku-ji Temple complex on Mount Hiei and he also travelled to China to further his studies. Upon his return home, Saichō received official permission to establish the Tendai school in Japan. The school forged its own independent path while clearly differentiating its teachings from those of the traditional great temples of Nanto (Nara). This chapter uses treasures associated with Saichō to tell the tale of his eventful life.

This certificate testifies that Saichō’s senior disciple Kōjō had been ordained under the Mahayana precepts in accordance with Saichō’s wishes. It lists Kōjō’s merits and it was brushed by Emperor Saga, a renowned calligrapher. The graceful calligraphy imbues the large characters and the unconstrained brushwork with an overarching sense of harmony.

Saichō was succeeded by Jikaku Daishi Ennin (794–864) and Chishō Daishi Enchin (814–891). These two priests travelled to the Chinese capital Chang’an to gain a deeper grounding in Esoteric Buddhism, which Saichō had also studied while in China. They subsequently established the foundations of Tendai Esoteric Buddhism. Other notable Tendai priests include Sōō (831–918), who founded the ascetic practice of circumambulating holy mountain sites, and Annen (841–902–). These men systemized the doctrines of Tendai Buddhism.

This chapter explores the unique path travelled by Japan’s Tendai school after the incorporation of Esoteric Buddhism.

The Nobility and Tendai Art

In the middle of the 10th century, the temple complex on Mount Hiei was revived by Jie Daishi Ryōgen (Ganzan Daishi; 912–985). Under Ryōgen’s leadership, and with the deep devotion and economic support of the Emperor and the powerful Fujiwara clan, Tendai Buddhism reached the height of prosperity.

However, Ryōgen’s disciple Eshin Sōzu Genshin (942–1017) distanced himself from worldly matters. Amid growing concerns about mappō, an impending age of degeneracy and chaos, Eshin applied himself to writing the Ōjōyōshū (Essential Teachings for Rebirth to the Pure Land). This treatise incorporated the Pure Land philosophy into Tendai thought, with the resultant Tendai Pure Land Buddhism providing succor for many with its promise of rebirth in a Buddhist paradise.

This chapter features magnificent Tendai treasures associated with the religious devotion of the nobility. In doing so, it examines the major role the Tendai Pure Land school had in shaping Japanese Buddhism.

As Buddhism permeated the Japanese consciousness, the Lotus Sutra and its doctrine of universal salvation inspired Hōnen (1133–1212), Shinran (1173–1263), Nichiren (1222–1282) and other priests to found new schools that became collectively known as New Kamakura Buddhism. After training at Mount Hiei for over 20 years, meanwhile, Shinsei (1443–1495) established the Tendai Shinsei school based on Pure Land thought and the observance of Buddhist precepts.

The syncretic Sannō Shintō school of Tendai Buddhism was also founded during the medieval period based on the theory of honji suijaku, which states that Japan’s indigenous kami (gods) are manifestations of Buddhist deities. This new school was centered around the worship of Hie Sannō, the tutelary shrine of Mount Hiei.

This chapter examines how the teachings of the Lotus Sutra led to the blossoming of a rich variety of Tendai schools during Japan’s medieval period.

Tendai Buddhism During the Edo Period

In 1571, the temple complex on Mount Hiei was razed to the ground by Oda Nobunaga, though it was later restored by Toyotomi Hideyoshi and the Tokugawa Shogunate. Jigen Daishi Tenkai (1536–1643) played a pivotal role in this restoration. He served under the Tokugawa Shogunate and he developed Tōshōgū Shrine and Rinnō-ji Temple on Mount Nikkō as memorials to Tokugawa Ieyasu, who was deified as Tōshō Daigongen after his death. Tenkai also established Tōeizan Kan’ei-ji Temple in Edo (present-day Tōkyō) and he laid the foundations for Tendai Buddhism’s propagation across the Kantō region.

This chapter explores the history of Tendai Buddhism during the Edo period through the resplendent Edo Tendai treasures that blossomed under the patronage of the Tokugawa Shogunate.

The Spread of Tendai Buddhism Across Japan

Tendai Buddhism places great emphasis on the Lotus Sutra teaching that “the path to enlightenment is open for anybody.” This doctrine formed the basis of the Tendai school’s propagation across Japan. The ancient Japanese practice of worshipping kami (gods) who dwell in sacred mountains was also incorporated into Tendai Buddhism, with this unique syncretism still practiced in many parts of Japan today. This chapter uses treasures passed down across Japan to explore how Tendai Buddhism prospered throughout the whole country. 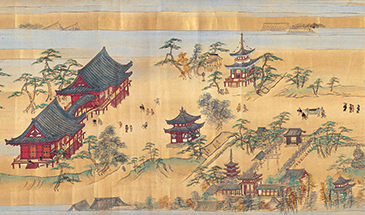 These illustrated scrolls recount the life of Jigen Daishi (Tenkai). From the postscript on the third scroll, we know the text was written by Inkai, Tenkai's disciple and an academic chief at Kan’ei-ji temple, with the illustrations handled by Sumiyoshi Gukei, an official painter for the Tokugawa Shogunate. This is also one of Gukei's representative works.