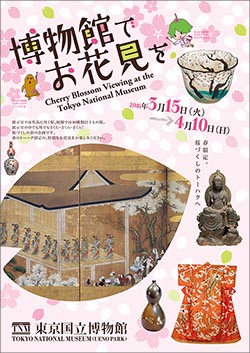 "Cherry Blossom Viewing at the Tokyo National Museum" is an annual event that coincides with the Spring time Opening of the Museum Garden (Tuesday, March 15 – Sunday, April 10, 2016). There are many artworks featuring cherry blossoms on display in the Japanese Gallery (Honkan), as well as a host of events including gallery talks, haiku poetry gatherings and concerts.

The sun and moon are depicted with gold and silver plating, respectively. Presumably these screens were combined from two different works as suggested by the differences in technique and the disjointedness of the compositions.

This uchikake is made of red-dyed satin with a woven crane design. The embroidered motifs of decorated herb balls and bamboo curtains are examples of Japanese auspicious designs. In a custom dating back to ancient times, herb balls decorated with flowers and strings of five colors were traditionally hung from bamboo curtains and pillars on May fifth to ward off evil spirits. 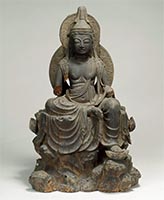 Color has been used to depict the indoor scene and objects in the path of the lamplight, with the darkness of night expressed in contrast through the absence of color. The areas bathed in light have been depicted delicately, and the cherry trees framing the design field are of different types. The work is rendered predominantly in ink, and using the effect of benigirai (lit., “despising red,” a technique of avoiding vivid colors - particularly vermillion) captures the essence of a gentle spring night.

During this period, we are holding a stamp rally based on artworks that feature cherry blossoms. Visitors who collect all stamps will be eligible to receive an original button badge. 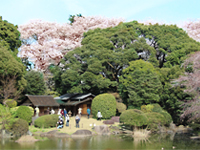 The Museum Garden behind Honkan (main building, Japanese Gallery) will be open to the public during springtime.
10 different species of cherry trees blossom one after another every year. Enjoy strolling among the cherry trees and the five teahouses.
*March 25, April 1 and April 8, open until 19:30

For more information about other events, please see "Related Events" below.