Chapter 1: The Origins of Japanese Sports as Seen in Arts and Crafts

Chapter 2: Modern and Contemporary Japanese Sports and the Olympics

Chapter 1: The Origins of Japanese Sports as Seen in Arts and Crafts

The history of sports in Japan can be traced all the way back to primeval times. These origins are highly diverse, ranging from the imperial court events of the nobility and military arts of samurai to games of the common people, religious rituals, and performing arts. Such ancient forms have been passed down to the present day as aspects of traditional culture like sumō wrestling, yabusame horseback archery, and the kemari ballgame, as well as modern Japanese martial arts like kendō and kyūdō. These have much in common with modern sports and the Olympic spirit in the sense that they involve competitions of skill according to predetermined rules in order to train the mind and body.

Chapter 1 introduces the origins of Japanese sports during the Edo period (1603–1868) and earlier through paintings, crafts, and other artworks from the collection of the Tokyo National Museum.

Kasagake is a practical mounted archery technique in which archers shoot special whistling arrows from atop a galloping horse.

Kotetsu swords are known for their exceptional cutting ability. Yotsudō in the inscription means "four bodies" and indicates that when the blade was tested, it was sharp enough to cut through the stacked corpses of four criminals.

Chapter 2: Modern and Contemporary Japanese Sports and the Olympics

Chapter 2 covers the history of Japanese sports from early modern times to the present day. As showcased in Chapter 1, various physical activities closely tied to traditional culture have existed in Japan since ancient times, and these can be considered the “origins” of Japanese sports. The modern concept of “sports” came to Japan from overseas after the Meiji Restoration of 1868, and the Olympics played a particularly important role in popularizing and cultivating sports in Japan.

Chapter 2 presents early Japanese sporting equipment and gear, Japan’s participation in the Olympics, and its process of successfully bidding to host the Games through materials from the collection of the Prince Chichibu Memorial Sports Museum. 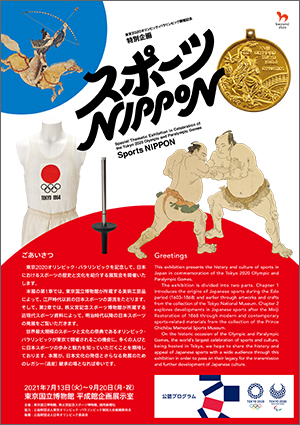 
This pamphlet is also available at the information desk in the Heiseikan during the exhibition period.