National Treasures of To-ji Temple; Kukai and the Sculpture Mandala

About the Exhibitions and Highlights


Kukai was born in Sanuki Province (modern-day Kagawa Prefecture) in 774. He began his Buddhist training when he was 23 and travelled to China with a Japanese envoy to further his studies at age 31. He learned the secrets of Esoteric Buddhism from the priest Keika in the Tang-dynasty capital Chang’an. He returned to Japan nearly two years later and then used To-ji and Mount Koya as bases to promulgate the teachings of Esoteric Buddhism. He is also renowned as a master calligrapher. His most accomplished calligraphic work is the National Treasure Fushinjo (Letters to Saicho) (No. 6; on display until May 19).

Kukai passed away at Mount Koya in 825. He was given the posthumous name Kobo Daishi and became an object of worship himself. The Miedo hall was built on the grounds of Kukai’s former residence to house an image of him. Food offerings are still served to this image every day at 6:00 in the morning. Furthermore, a popular “Kobo Market” is held at To-ji on the 21st of each month, a custom derived from a ritual performed at Miedo Hall on the anniversary of Kukai’s passing.

Kukai (774–835) was 31 when he travelled to China for around two years to learn the secrets of Esoteric Buddhism. He then established the Esoteric Shingon school upon his return to Japan in 806. After Emperor Saga granted Kukai control of To-ji, Kukai built the temple up to be the focal point of Shingon Esoteric Buddhism. He had a three-dimensional sculpture mandala installed in To-ji’s Lecture Hall, for instance, and he filled the temple with paintings, ritual implements and other items brought back from China.

He was later given the posthumous name Kobo Daishi and became an object of adoration and worship himself. Paintings and sculptures of Kukai often depict him holding sacred jewels in his left hand and an Esoteric Buddhist implement in his upturned right hand. Kukai is also renowned as a master calligrapher. His most accomplished work is the National Treasure Fushinjo (No. 6), which consists of letters he wrote to another Buddhist priest, Saicho (766/7–822), after the latter had established Enryaku-ji Temple at Mount Hiei. 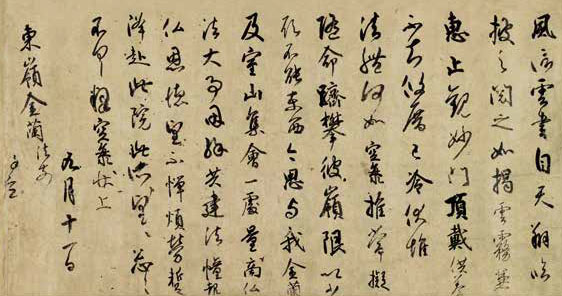 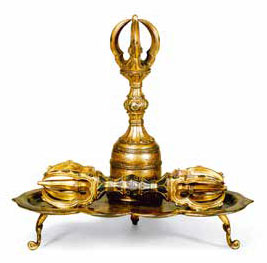 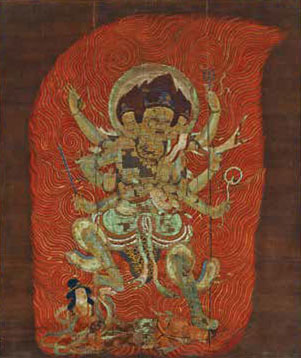 The teachings of Esoteric Buddhism are passed on using paintings, sculptures, and other artworks. Therefore, it is important to consider not only the act of creating such artworks itself, but also how the viewer would feel before them.

This chapter introduces several paintings and craft works used in Esoteric Buddhist rituals. The paintings include Mandalas of the Two Realms. These help practitioners to visualize the immense Esoteric Buddhist pantheon by portraying numerous Buddhist deities in a set order. Other paintings portray specific deities. These were made to pray for the realization of wishes, with the most efficacious deity chosen accordingly. Also on display are several ink or color paintings created to communicate the true forms of deities, as revealed in Buddhist sutras. This chapter also introduces folding-screen paintings used during a consecration ritual known as the Kanjo ceremony. These protected the ceremonial halls and imbued them with a sense of solemnity. Also featured are objects such as offertory vessels, a large daidan platform for holding ritual implements, and a majestic canopy hung above Buddhist statues. These masterpieces provide an introduction to the unique Esoteric Buddhist artworks passed down at To-ji.

Second Screen (On exhibit from May 14 to June 2, 2019)
Pair of Screens with the Twelve Devas
Heian period, dated 1191 (To-ji Temple, Kyoto, National Treasure) 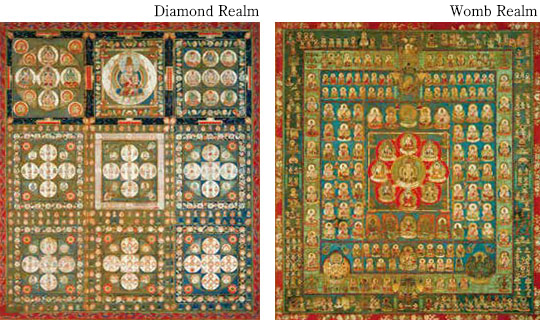 Mandalas of the Two Realms (The Sai-in Mandalas; formerly said to be the Shingon-in Mandalas)
Heian period, 9th century (To-ji Temple, Kyoto, National Treasure)
(On exhibit from April 23 to May 6, 2019)

To-ji was established following the relocation of the capital to Heiankyo (Kyoto). Emperor Saga granted control of To-ji to Kukai, who then made the temple the focal point of Shingon Esoteric Buddhism. To-ji has retained this role down to the present day and it has collected a multitude of treasures over this long history. These reveal very much about the history of religious practices at the temple.

For example, the masks of the Twelve Devas and the Assembly of Eight (Nos. 59–62) were used in consecration rituals and ceremonies to enshrine relics of the Buddha. They were used alongside various other ritual implements (Nos. 63–64, Nos. 66–68). Furthermore, the Seated Female Deity (No. 69), a National Treasure was passed down at the Hachimangu, To-ji’s tutelary shrine. It illustrates Kukai’s devotion to the Shinto deity Hachiman. Moreover, the Toboki (No. 77), a National Treasure, is To-ji’s official record. It details the temple’s history, its Buddhist images, and its ceremonies. All these treasures illuminate the religious practices of To-ji.

The details of To-ji’s 1,200-year history are revealed by the various treasures passed down carefully to the present day. Of particular value in this respect is the Standing Tobatsu Bishamonten (Vaisravana) (No. 84), a National Treasure noted for the unusual way it stands on female deities. This statue was once installed at the Rajomon gate in Heiankyo (Kyoto), while the Ridge-end Tile (No. 91) was used in the gate’s construction.

The Standing Jizo Bosatsu (Ksitigarbha) (No. 85) was built at the same time as To-ji, though it was only transferred to To-ji after Sai-ji temple fell into disuse during medieval times. The statue of the Seated Holy Priest (No. 86) predates Kukai’s arrival at To-ji, while the Shishi Lion (No. 87) may have stood at the dais of the Dainichi Nyorai (Mahavairocana) statue that Kukai installed in To-ji’s Lecture Hall (Kodo) to serve as its principal image of worship. All these treasures speak volumes about To-ji’s long and varied history. 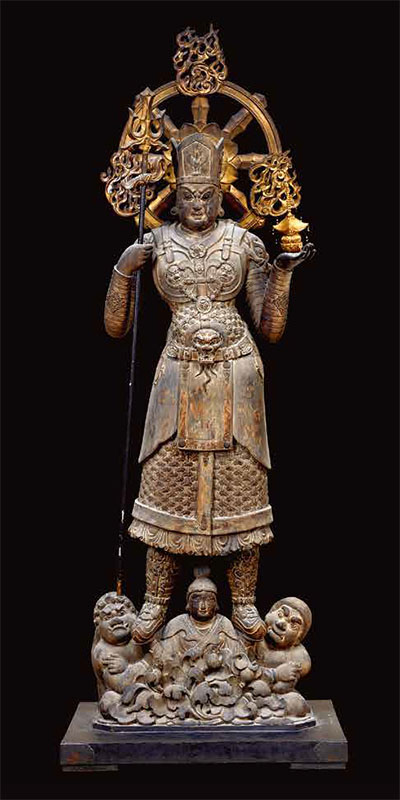 Chapter 4 The World of Mandalas

Mandalas can also be expressed using statues. These are known as "sculpture mandalas" or "karma mandalas." It is thought Kukai selected and arranged the 21 statues in the sculpture mandala at To-ji’s Lecture Hall (Kodo). These works are foremost examples of a sculpure mandala and convey the unique aura of Esoteric Buddhist deities and the vast expanse of the Esoteric Buddhist universe more directly than painted mandalas. 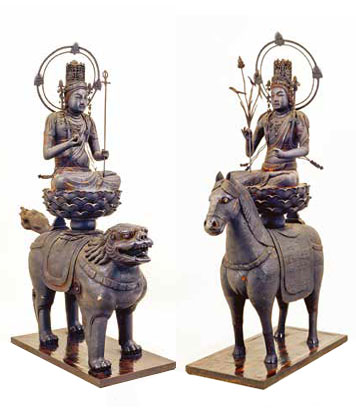 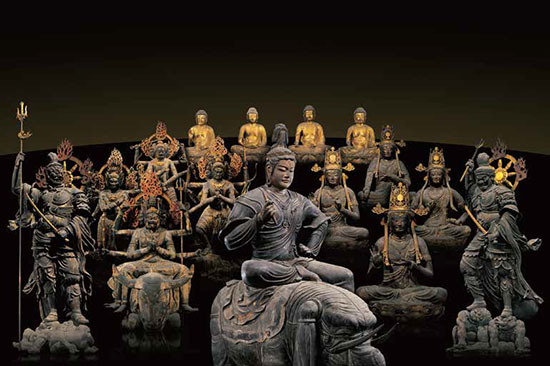