Depicted on this pair of screens is a scene of cherry blossom viewing by people dressed in garments with the latest designs. Whether it was intended to portray a particular event or setting is unclear. The surrounding trees and curtains, however, create a dramatic effect in which the people performing a folk dance and the ladies watching them appear as though they were on a stage. 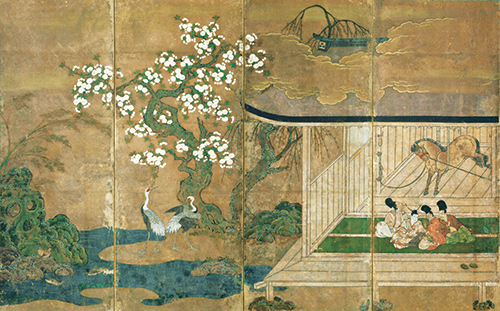 This painting depicts six horses in a stable across two screens. The right end shows pines, wisteria, herons, and tortoises, while the left portrays cherry and willow trees, cranes, and mandarin ducks. There are also people playing traditional board games such as igo, shogi, and sugoroku, as well as a dog and a monkey. Although the primary theme is fine horses, this work features auspicious “flower and bird” motifs and elements of genre painting. 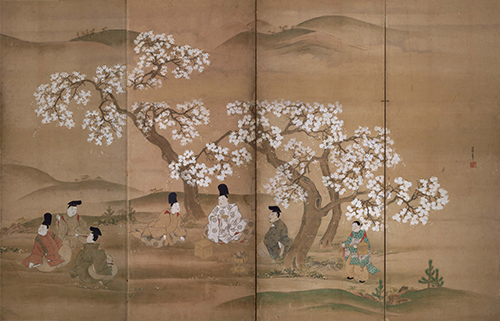 A prince at his villa with his attendants is portrayed enjoying composing poems among cherry blossoms in a scene from The Tales of Ise. 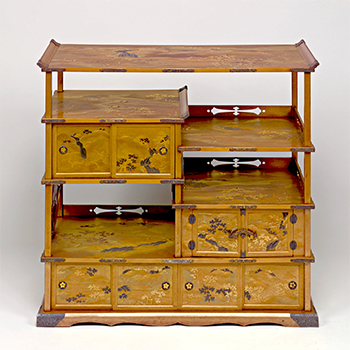 Making ample use of thin sheets of gold, this bookcase is adorned with scenes of Mount Yoshino in Nara, which has been famous for its brilliant cherry blossoms since antiquity.

In this poem, the narrator entrusts his loyalty to Japan to the beauty of its cherry blossoms. It was written while its author, Sakuma Shozan, was confined in his home on suspicion of secretly playing a part in the overseas passage of his student Yoshida Sho’in, during the time of Japan’s seclusionist policy. An advocate of international exchange, at 54 years of age Shozan was attacked and killed by seclusionists in the Sanjo district of Kyoto. Produced during his final years, this work demonstrates a mastery of the styles of Chinese Tang dynasty calligrapher Yan zhenqin.

Ukiyo-e and Fashion in the Edo Period: Ukiyo-e 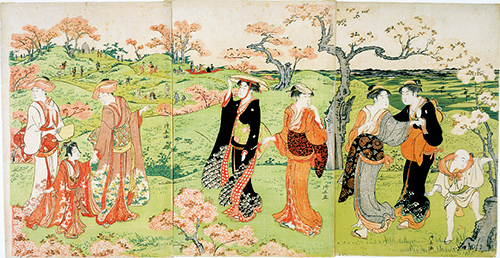 Ukiyo-e and Fashion in the Edo Period: Fashion 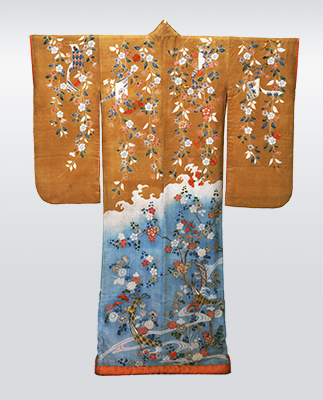 This garment for an unmarried woman is decorated with patterns of spring plants at the top and autumn plants at the bottom, making it appropriate for both seasons.

The fearsome deity Acalanatha is tasked with converting unbelievers to Buddhism. This is one of the earliest standing images of him and was carved from cherry, a wood that was rarely used in Buddhist sculpture. 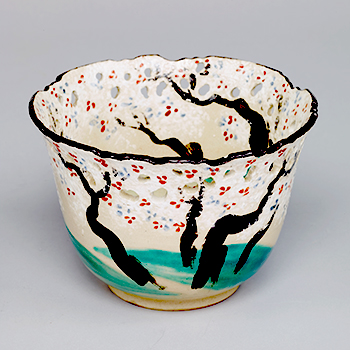 Created by a renowned Kyoto potter who was active in the late Edo period (1603-1868), this bowl features cherry trees, and has a box bearing inscriptions. 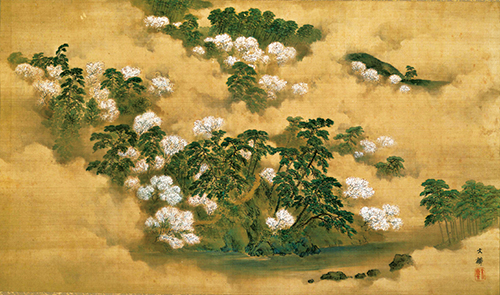