Recommended architectural spots were selected in this course. You may walk around viewing historical buildings Honkan, the typical of Imperial Crown Style and Western style Hyokeikan from the later Meiji period, and modern buildings designed by internationally active architects.

After the Great Kanto Earthquake of 1923 (Taisho 12), the current Honkan building replaced the collapsed building designed by J. Conder. To commemorate the Emperor Showa's enthronement, the new design plan was designated to be "Japonesque based Oriental style" and a public contest was held to choose an architectural design.
Honkan, in Imperial Crown Style, characterized as an Oriental fusion of concrete buildings and roof tiles on top, was designed by Watanabe Jin. He is famous for his other works of Ginza Wako department store and Hara Art Museum. Marble stairs in the entrance hall built in wellhole style is the signature spot of this building, often used for filming of TV advertisements and dramas. Interior designs of clocks and stained glasses are also popular to see.

It was opened in 1968, designed by Taniguchi Yoshiro. The exhibit rooms are arranged in a spiral ascending from the basement to the 5th floor.
The Toyokan renovations for protect against earthquakes were refurbished on January 2, 2013.

Hyokeikan, a memorial building for the royal marriage of the Emperor Taisho in 1900 (Meiji 33), is one of the most representative Western style architecture in the late Meiji period.
Hyokeikan was designed by a royal court architect Katayama Tokuma; his other work is a guest house for VIPs in Yotsuya, Tokyo.
Two lions are welcoming you at the entrance; the left lion's mouth closed and the right lion's opened.

Kuromon or Black Gate, is a main gate of the feudal lord Tottori domain, Ikeda family's Edo residence, its original location at previous passage of Marunouchi Damimyo (present Chiyoda-ku Marunouchi 3).
Kuromon was moved twice; in the Meiji period Takamatsumiya residence took it over used as the main gate of Togu-gosho, in 1954 (Showa 29), and it was moved again to be settled in TNM. The period of its original creation is unknown; considerably its form and building techniques suggest it was made in the late Edo period. This gate of a daimyo residence is equally well known as Tokyo University's Red Gate in its architectural style. The gate is opened on Saturday, Sunday and holidays between 10:00 and 16:00.

* Kuromon may not open depend on the weather.

5. The Gallery of Horyuji Treasures

Gallery of Horyuji Treasures was opened in 1964 (Showa 39) for the purpose of conservation and exhibition treasures offered to Horyuji. The previous gallery was able to exhibit collections to the public once a week only due to the conservation regulation. The current building replaced the old building due to the improvement of its conservation ability to be viewed by the public more. The building surrounded by trees with a pool in front and quiet calm exhibition rooms is designed by Taniguchi Yoshio, the architect designer of NYMoMA.

This is a repository of treasures or sutras located at Jurinin Temple within the Goganji Temple compound in Nara. A small azekura style repository built in the Kamakura period has inner walls decorated by the paintings of Shakyamuni with the sixteen good deities, which indicates Daihannya Kyo was dedicated.
Today viewing inside the building is not permitted, you can view stones inscribed with the sixteen good deities on four areas under the floor. 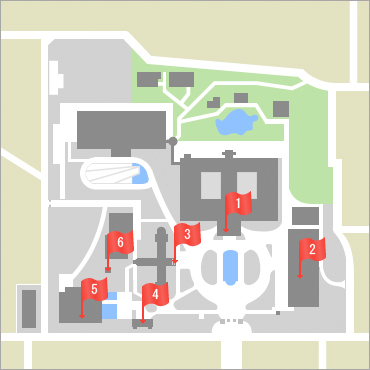