Izumo and Yamato: The Birth of Ancient Japan

The Chronicles of Japan (Nihon Shoki) 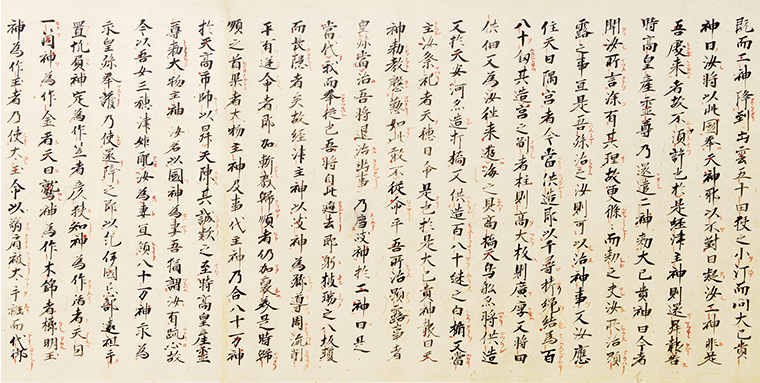 Ancient legends tell of the founding of Izumo Shrine, renowned as one of the oldest shrines in Japan. It is dedicated to Ōkuninushi, the ruler of the sacred world of the Shinto gods. Allegedly, the shrine's inner sanctuary once stood at a height of 48 meters, and in the year 2000, enormous cedar pillars were discovered on the shrine's grounds. The Sacred central pillar (No. 12) and Central pillar at front of inner sanctuary (No. 13) supported the inner sanctuary during the Kamakura period (1185–1333) and attest to the majestic appearance of the once-towering shrine. Many valuable objects have been passed down at Izumo Shrine, including elaborate cosmetic boxes, armor, and paintings that once adorned the shrine.
This section features the colossal pillars that supported the inner sanctuary in the Kamakura period as well as Izumo Shrine's many ancient treasures.

Izumo developed a distinct local culture through its early exchanges with mainland Asia across the Sea of Japan. Until the mid-Yayoi period (ca. 2nd century-1st century BCE), rituals performed in Izumo featured the use of bronze artifacts (like those found at Kōjindani ruins and Kamo Iwakura ruins). From the late Yayoi period (ca. 2nd century—3rd century), Izumo became the first region to stop performing ceremonies with bronze artifacts and replaced them with ceremonies held at massive burial mounds with elongated corners. These distinctly-shaped tombs were found along the southern and northern coast of the Sea of Japan surrounding Izumo, pointing to a local ritual culture that differed from that of the Yamato region.
This section explores the origins of Izumo's ancient rites by tracing the changes in ritual objects dating from the 5th century BCE to the 3rd century CE.

Keyhole-shaped tomb mounds were built in the Yamato region (now Nara Prefecture) as symbols of power and authority. They also functioned as platforms for rulers to use when presiding over rites and ceremonies. As Yamato developed into a cohesive state, further signs of centralized authority appeared, such as large terracotta tomb figures (haniwa) from the Mesuriyama Tumulus (No. 51–7) and numerous mirrors buried in the Kurozuka Tumulus with sawtooth patterning on their rims and designs of deities and animals (No. 52–1). The Yamato rulers were also able to acquire rare goods and technologies from East Asia. They gave these luxury imports, and goods inspired by them, to regionally powerful families to win their allegiances. As a result, the Yamato rulers gained inclusion in the East Asian political sphere and were able to consolidate Japan into an early nation-state.
This section examines the historical context in which the Yamato court was founded. It also introduces the rich developments in form and design occurring from the 3rd century to the 7th century, seen in artifacts such as tomb figures (haniwa) and burial objects.

In the mid-6th century, Japanese society was transformed by the introduction of Buddhism along with other influences from mainland Asia. Belief in Buddhism spread from the imperial court to powerful families in the provinces and Buddhist temples replaced burial mounds as symbols of political power and authority. By the latter part of the Asuka period (593–710), Buddhist temples had been built throughout the country. Envoys returning from China's Sui and Tang dynasties brought back information on the latest developments in Asia, and the imperial court used these developments to shape their emerging state. The court also actively engaged in constructing Buddhist temples and guardian sculptures, such as the Four Heavenly Kings, under the belief that their devotion to Buddhism would be rewarded with divine national protection.
This section introduces forms of art that arose within the context of an emerging Buddhist state ruled by an emperor. These works embody their creators' prayers for a peaceful society and national stability.