Chapter 1: The Beauty of Everyday Tools

About 13,000 years ago, the Japanese archipelago saw the end of the Paleolithic era and the beginning of the Jomon period, which would continue for approximately 10,000 years. The name of this period is derived from the cord marks ( jomon) that ornament its distinctive pottery. Shortly after the Jomon period began, the end of the last glacial period ushered in a warm and humid climate, and led to the formation of the mountains, forests, rivers, oceans, and seasonal changes that we are familiar with today. The people of the Jomon period led sedentary lives, building pit dwellings and relying on hunting, fishing, and gathering for sustenance.
The beginning of the Jomon period was marked by the creation of pottery, which was initially used for cooking, but later took on roles beyond this practical function. Implements for hunting and fishing, such as bows and arrows, antler fishhooks, and harpoons, as well as those for preparing food, such as stone mortars and pestles for grinding nuts and root vegetables, were devised in accordance with the milder natural environment. This chapter reveals the beauty of the various implements that the Jomon people created for daily life. 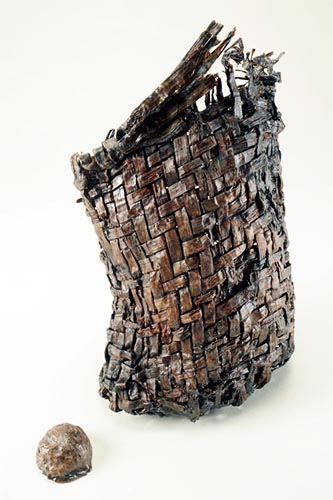 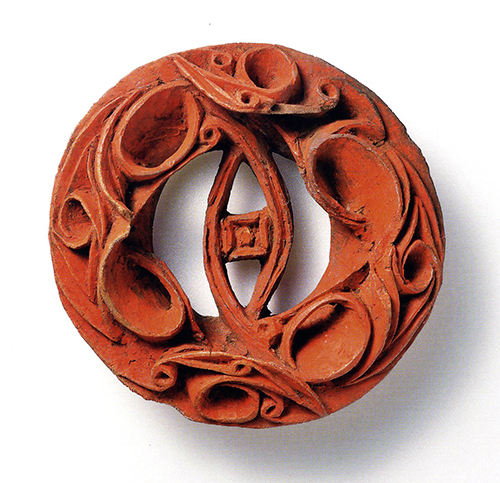 Chapter 2: A Surge of Creative Activity

Jomon pottery continued to be made for an astounding 10,000 years. During this span of time, its three-dimensional forms and the beauty they expressed were constantly changing. The combinations in which different pottery vessels were used, as well as their shapes and patterns, varied greatly depending on both time and region. Vessels with flame-like ornamentation, which are considered one of the foremost examples of Jomon pottery, are a product of this great surge of creative activity.
Jomon pottery was decorated in a variety of ways. Patterns were created using nails and fingertips, braided ropes, seashells, as well as sticks and spatulas made of bamboo and other woods. For three-dimensional ornamentation, additional clay was attached to the surface. The beauty of pottery from the Incipient, Initial, and Early Jomon periods may be observed in two-dimensional surface patterns. In contrast, three-dimensional ornamentation, such as that seen in vessels with flamelike ornamentation from the Middle Jomon period, was created through the addition of clay. Meanwhile, the beauty of pottery from the Late and Final Jomon periods may be found in intricate arrangements of lines created with sticks, spatulas, and other tools. By focusing on the forms and patterns of Jomon pottery, this chapter explores how its beauty changed over ten millennia. 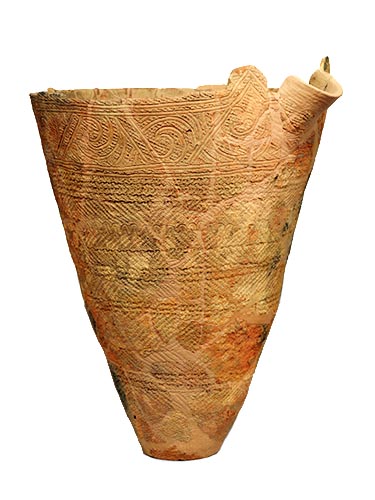 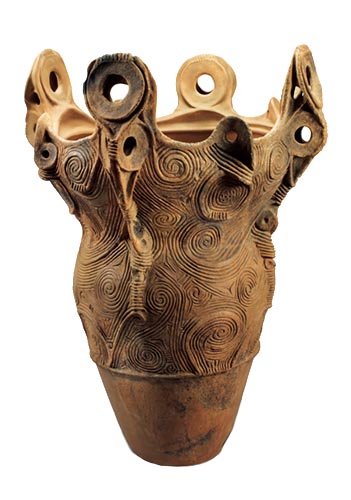 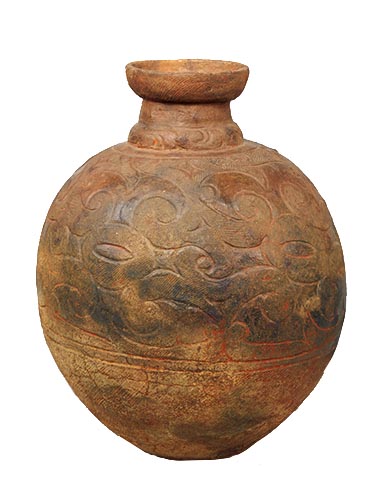 Chapter 3: Jomon Pottery and the World

Jomon society emerged on the Japanese archipelago, which is located on the eastern fringes of Asia. Despite relying on hunting, fishing, and gathering for sustenance, this society produced some of the world’s oldest pottery, which also possesses extraordinary beauty of form. Jomon pottery objects, the most prominent of which are vessels with flame-like ornamentation, were created in a variety of forms that changed drastically based on region and time. Their beauty is now recognized worldwide.
In Eurasian, during the time corresponding to the Middle Jomon period, agriculture and the rearing of livestock were already being practiced, and metal implements were being created. In Mesopotamia, monarchs oversaw sprawling cities, while artisans in workshops mass-produced pottery as commercial products. In contrast to Jomon pottery, simple, utilitarian pottery vessels with painted decorations or polished surfaces were being produced in Eurasia. This chapter compares the aesthetics of pottery produced by diverse cultures and societies across Asia and Europe. 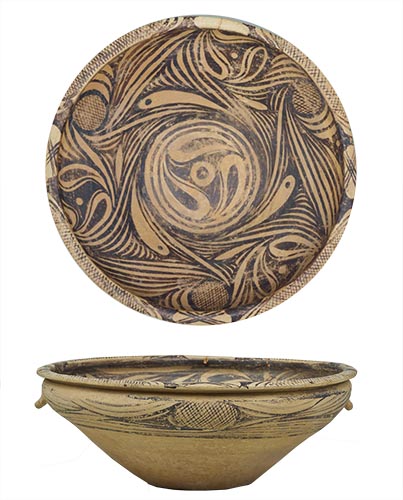 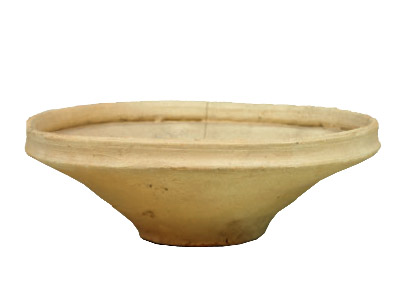 Chapter 4: The Zenith of Jomon Art

During the 10,000 years that was the Jomon period, objects in a wide variety of shapes were created. Among them, vessels with flame-like ornamentation and dogu clay figurines designated as National Treasures have an exceptionally strong sense of presence. Thus far, six excavated objects from the Jomon period have been designated as National Treasures, with the first one, designated in 1995, being the clay figurine known today as the “Jomon Venus” (No. 80). These designations reflect a recent and growing interest in Jomon culture and society, and show that the objects it produced are being reevaluated in a positive light.
Characterized by powerful three-dimensional ornamentation that seems to burst out from their surfaces, vessels with flame-like ornamentation that are designated as National Treasures are symbolic of Jomon pottery as a whole, and reflect the ability of the Jomon people to create objects with richly-expressive forms. The National Treasure figurines known as the “Jomon Venus” and the “Jomon Goddess” were also created during the Middle Jomon period, which was one of the periods of stability in Jomon society. These striking objects show that Jomon culture reached maturity during this time. This chapter provides an opportunity to encounter ceramic vessels and figurines that are a rich distillation of Jomon beauty. 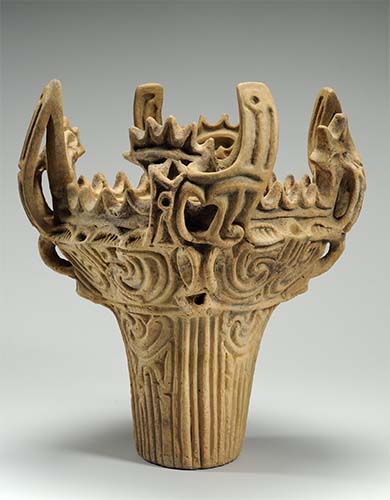 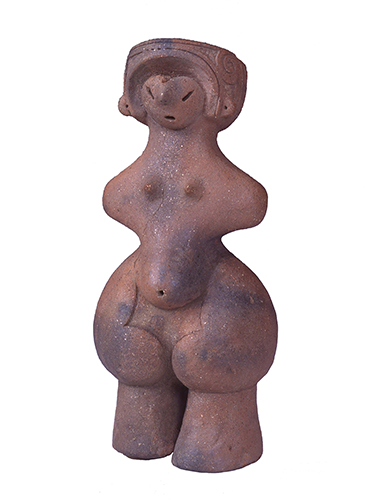 Figurines called dogu are symbolic of how the Jomon people gave form and beauty to the abstract concept of prayer. These ceramic figurines were made since the beginning of the Jomon period. Although early dogu consist of highly abbreviated forms without heads, arms, or legs, the presence of breasts clearly shows that they are based on the female form. That dogu were created to represent women, who create and nurture life, remained constant throughout the Jomon period, and suggests that these figurines were used as ritual objects to pray for safe delivery and fertility. In contrast, stone rods symbolic of men were created from the latter half of the Early Jomom period. As some of these rods are realistic depictions of male genitals, they are thought to have been created to pray for fertility and the abundance of offspring.
Jomon pottery, which sometimes portrays human or animal forms, but is more often decorated with abstract designs, embodies the beliefs of the Jomon people. In addition to these vessels, ceramic objects with impressions of hands and feet were created and are believed to express parents’ feelings towards their children, while those shaped like animals reflected wishes for rich bounties from land and sea while expressing an awe and fear of nature. This chapter presents objects that reflect the spirit and beliefs of the Jomon people. 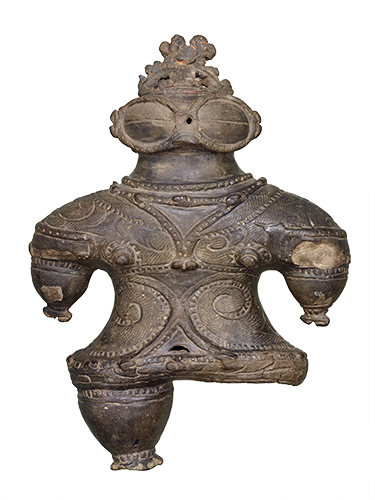 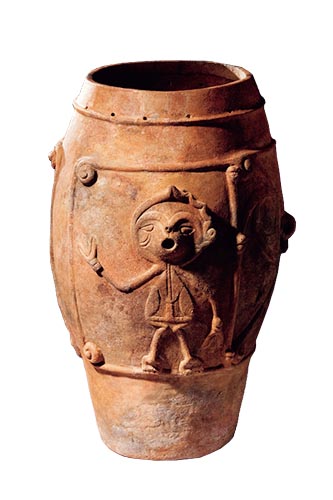 The excavation of the Omori shell mound in the Meiji era (1868–1912) marked the discovery of the Jomon period and the beginning of archaeology in Japan. It was modern writers and artists, however, who first recognized Jomon objects for their beauty, elevating them beyond their status as artifacts studied by archaeologists. Okamoto Taro (1911–96), an influential artist famous for having said that “art is an explosion,” was strongly influenced by the Jomon pottery he saw on display at the Tokyo National Museum. These ancient objects, which he said “have the power to make one cry out,” shook his beliefs about the essence of art.
Prior to Okamoto, some writers showed a liking for the Jomon period. Yanagi Muneyoshi (1889–1961), the founder of the mingei folk art movement, prepared a special storage box for his gangu (stone figurine), while the textile artist Serizawa Keisuke (1895–1984) produced book illustrations of dogu (clay figurines) in his collection. A little-known fact is that the potter Hamada Shoji (1894–1978), together with his student Shimaoka Tatsuzo (1919–2007), created Jomon pottery as educational objects. Shimaoka, based on this experience, created a new technique of ceramic decoration called “Jomon inlay,” which was influenced by the Japanese cord-braiding techniques practiced by his father, Yonekichi. This section explores the charm of objects from the Jomon period through modern writers, artists, and their treasured collections. 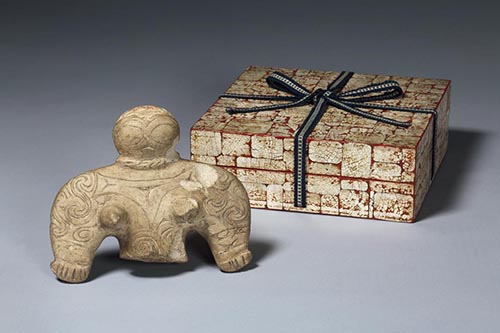 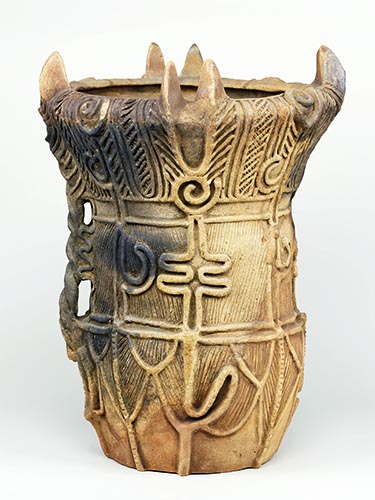