Kuroda Seiki, known in Japan as the father of modern Western-style painting, requested that part of his fortune to be used for the promotion of the arts before passing away in 1924.
The Kuroda Memorial Hall was created to fulfill his will. Designed by the architect Okada Shin’ichiro (1883–1932), a professor at the Tokyo School of Fine Arts, and completed in 1928, it is characterized by Ionic columns and textured wall tiles on the exterior, as well as skylights allowing natural interior lighting.
In 1930, the Institute for Art Research – forerunner of the National Research Institute for Cultural Properties, Tokyo – was installed in the hall, where it remained until moving to its present location in 2000. The hall was reopened to the public in September 2001 after being restored to its original state, and became part of the Tokyo National Museum in April 2007. Following the Great East Japan Earthquake of March 2011, it underwent earthquake strengthening construction from the fiscal year of 2012, and reopened once again in January 2015.
Selected artworks from the collection, which consists of 130 oil paintings, 170 sketches, sketchbooks, and other items, are now exhibited in a richer environment, including the new Collection Highlights Gallery reserved for the display of Kuroda’s most accomplished works.
(Artworks on display will be changed regularly for conservation reasons.)

Kuroda Seiki (1866–1924) was not only a painter who greatly impacted the art of modern Japan, but also an educator and administrator who actively promoted the arts. Born in present-day Kagoshima City, he was adopted at a young age by his uncle, Kuroda Kiyotsuna, and moved to Tokyo.
At the age of 17, he travelled to France to study law, but decided to become a painter two years later and trained under the French artist Raphaël Collin (1850–1916). During his nine years abroad, he learned
both academic painting, which became his artistic foundation, as well as Pleinairism, which involves the Impressionistic depiction of light.
Kuroda returned to Japan in 1893, where his use of bright colors and plain artistic expression were new to Western-style painters.
These qualities, backed by Kuroda’s liberal spirit, had a great influence not only on the arts of Japan, but also on its literary world. In 1896, Kuroda founded an artists’ group called the Hakubakai and became an instructor in the newly-formed Department of Western Painting at the Tokyo School of Fine Arts. Educating many young artists, he gradually established an academic system in the world of Japanese Western-style painting.
Seeking to modernize painting in Japan, he created Talk on Ancient Romance, which expresses specific concepts and ideas (these kind of paintings were the most highly-regarded in the West) but with
a Japanese subject, and Wisdom, Impression and Sentiment, which portrays idealized Japanese nudes. He also strived to establish the fitrst government-sponsored art exhibition, or Bunten, and acted as a member
of the House of Peers, which was the upper house of the Imperial Diet, as well as head of the Imperial Fine Arts Academy. As an administrator of the arts, he contributed greatly to improving the status of art in Japanese society. 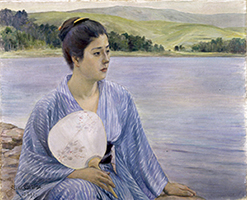 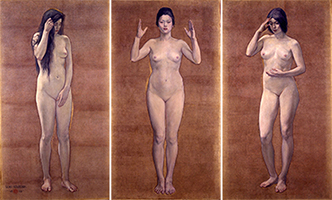 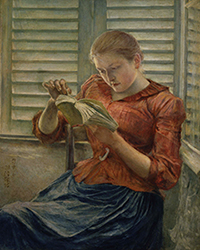 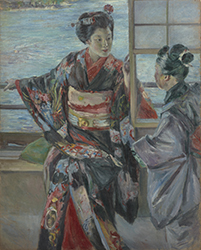 Created to honor Kuroda’s artistic career and exhibit his paintings, this room was opened to visitors when the hall was founded. Preserved in its original state, it allows visitors to view Kuroda’s artworks and gain glimpses of his character. 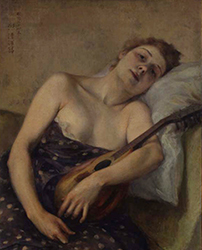