The Gallery of Horyuji Treasures

The building was designed by Yoshio Taniguchi and has been furnished with the latest in conservation technology. The reference room on the 2nd floor mezzanine has the "digital archive" which allows visitors to view the entire collection of Horyuji Treasures on computer with explanations provided in Japanese, Chinese, Korean, English, and French. A restaurant is located on the ground floor.
* The Horyuji Treasures consist of over 300 valuable objects, mainly from the 7th - 8th century, which were donated to the Imperial Household by Horyuji Temple in 1878. 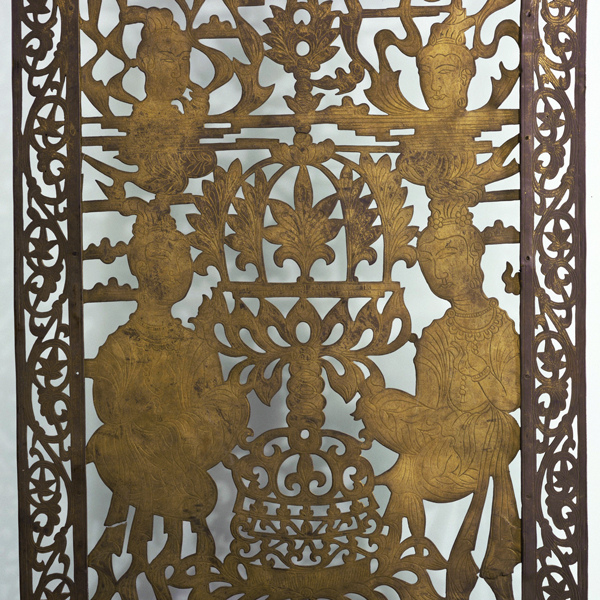 The Kanjō-ban (gilt bronze banner for the Kanjō ceremony) is one of the most outstanding items of The Hōryūji Treasures. It is believed to be the item listed as "one gilded Kanjō ceremony article" in The History of the Buildings of Hōryūji and The Inventory of the Temple’s Properties compiled in 747. The original is displayed here together with another metal banner, the “Small Gilt Bronze Ban”. 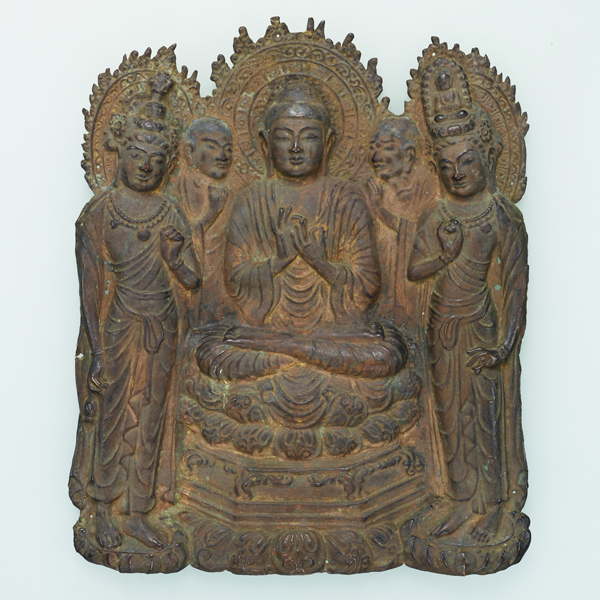 All of the 48 works of gilt bronze Buddhist statues in the Hōryūji Treasures are no more then 30–40 cm in height, and many of them are believed to have been used for private worship by local rulers. The halos date from around the same time as these gilt bronze statues, but they are displayed separately.
Repoussé Buddhist images could be mass-produced by placing a thin sheet of bronze over a relief image of a Buddhist divinity and hammering it into shape. In Japan, repoussé images flourished from the second half of the 7th to the early 8th century and were mostly hung on the walls of temple halls or kept in small shrines for private worship. The repoussé Buddhist images among the Hōryūji Treasures are a very important collection, not only in terms of age and number, but also for the variety of images. 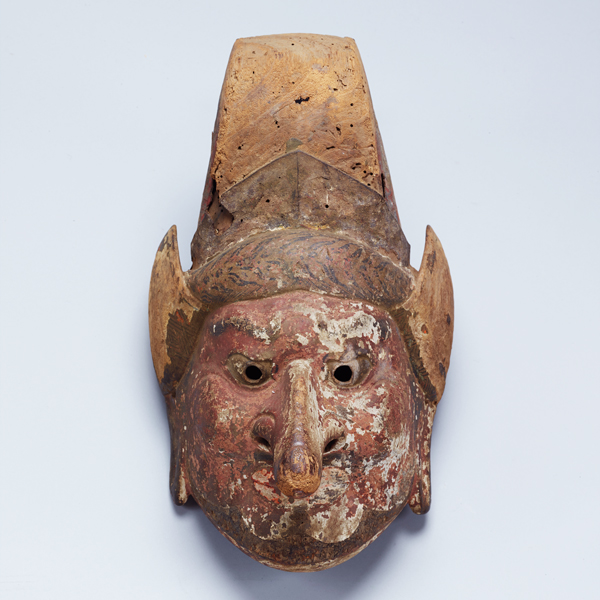 Gigaku was an outdoor Buddhist ceremony in which actors wearing large masks performed skits while parading to the accompaniment of music. Gigaku was introduced into Japan from the Korean kingdom of Baekje in the first half of the 7th century. After flourishing in the 7th and 8th centuries, however, it lost popularity and eventually ceased to be performed. The Hōryūji Treasures include 19 Gigaku masks made from camphor wood, nine made from paulownia wood, and three made with the dry lacquer technique. The camphor masks were most likely created between the second half of the 7th and the beginning of the 8th century, while the rest are thought to have been made in the 8th century.

On display only on Fridays and Saturdays 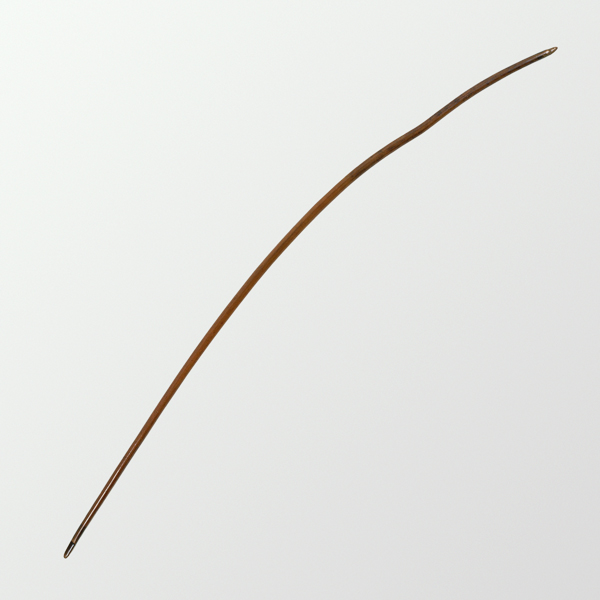 Wooden and lacquered objects include examples of Buddhist ritual implements, furnishings, musical instruments, stationery, measuring tools, and arms & armor, which range in date from the 7th to 17th century. Among these are notable pieces from the 8th century like the Bamboo Cabinet, which was donated by the famous Hōryūji priest Gyōshin, and a sutra box decorated with marquetry that shows the beautiful grain patterns of its jinkō wood. The Seven-stringed Zither is also valuable for its ink inscription, which tells us it was produced in China’s Sichuan Province in 724. The inscriptions on the pieces of incense wood in this collection also have revealed important facts about Persia’s involvement in the trade of such wood. Through these works one can not only see the culture of Japanese decorative art but can also get a sense of the cultural exchanges that occurred within East Asia centuries ago. 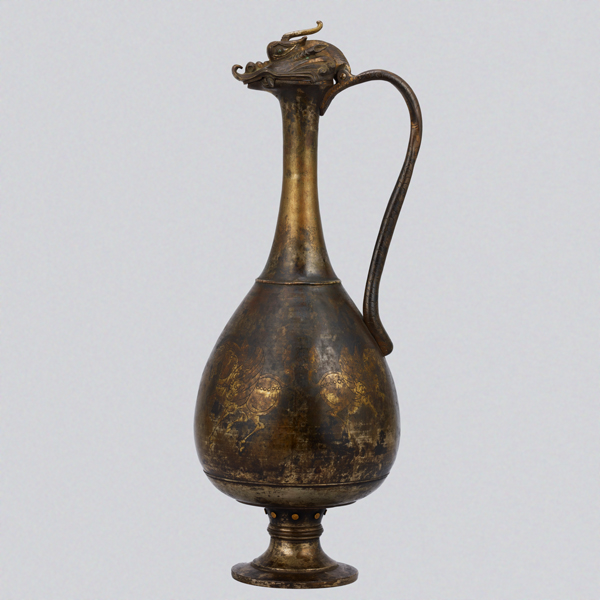 The majority of metalwork objects are Buddhist implements, which are classified into various categories according to their use. Kuyōgu are objects used for offerings and Sōgu are items used daily by priests. There are also ritual implements used exclusively at Esoteric Buddhist temples and bon’ongu used to strike the hours or to give a signal. They mainly date from the Asuka and Nara periods with later examples reaching up to the Edo period. A significant number of pieces were made in China and the Korean Peninsula or were strongly influenced by works from these regions. The shape and decorative design of the Dragonhead Pitcher are evidence of an active cultural exchange between Tang China and Persia. Other masterpieces include the Incense Burner with a "Magpie Tail"-shaped Handle (which is the oldest example of an incense burner with a handle in Japan), Bronze Mirrors with Seashore Designs which were donated by Empress Kōmyō to Hōryūji Temple in 736, and the Set of an Ink Cake Stand, Water Holder, and Spoon which are said to have been used by Prince Shōtoku when he wrote the Hokke Gisho annotations on the Lotus Sutra. 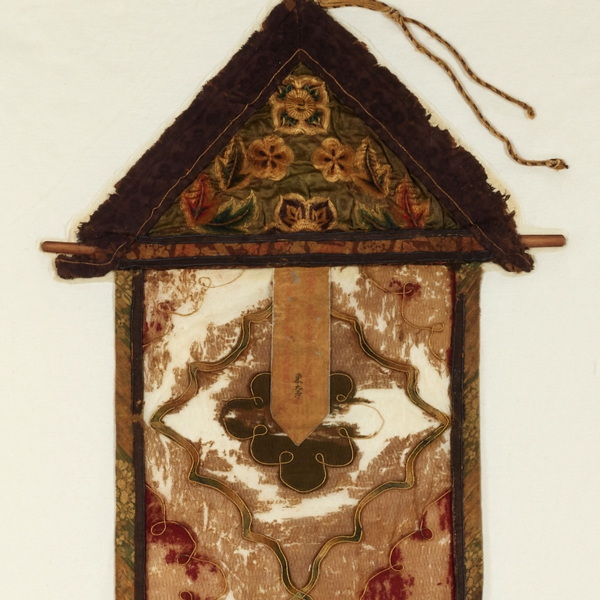 Hōryūji Temple preserved a remarkable collection of early textiles dating from the late sixth to eighth century at its grounds near Japan’s ancient capital of Nara. The temple dedicated many of those textiles to the imperial household in 1878 as part of a collection called the Hōryūji Treasures. After the Second World War, the collection was placed in the care of the government and is now housed at the Tokyo National Museum.

The year 2022 marks fifty years since the Museum launched a full-scale initiative to conserve the textiles in the Hōryūji Treasures. This thematic exhibition offers a unique glimpse into the Museum’s conservation activities.